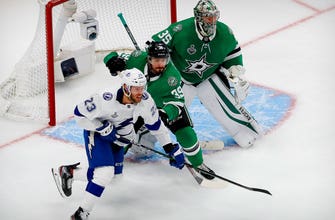 “Carter is a dynamic forward who brings an up-tempo, creative game to our team,” said Zito. “He has excelled at every level in which he has competed and we are thrilled to add him to our lineup.”

The 6-foot-2, 180-pound native of Toronto, Ontario, spent the prior two seasons with the Syracuse Crunch of the American Hockey League (AHL), amassing 130 points (51-79-130) over 134 regular season games. In 2018-19, he led the AHL in goals (34) and points (82) and led Syracuse in assists (48). He was named to the AHL First All-Star Team and awarded the AHL’s Willie Marshall Award and the John B. Sollenger Trophy for most goals and points in the league, respectively.

On the international stage, Verhaeghe won a Gold Medal with Canada at the 2013 IIHF World U18 Championship, notching four assists over seven tournament games.

Verhaeghe was originally selected by the Toronto Maple Leafs in the third round (82nd overall) of the 2013 NHL Draft.