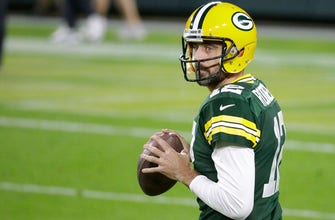 You could credit the fact that he’s fully healthy. Or maybe it’s because he’s in the second year of Matt LaFleur’s offense. Or, sure, it could be purely out of spite after Green Bay drafted Jordan Love in the first round.

No matter the reasoning, no one can debate Rodgers is an early candidate to win the 2020 NFL MVP.

Four weeks into the season, Rodgers has thrown for 1,214 yards and 13 touchdowns with no interceptions. The touchdowns and 128.4 passer rating are his best marks through four games over his 16-year career. Rodgers threw for more yards in that span just once – 1,325 yards through four contests in 2011, his first MVP campaign.

As the Packers’ starting quarterback rests this weekend and enjoys an odd bye week, we decided to rank his 13 touchdown passes so far this season, from easiest to most impressive. (Although, we love all of them equally.)

Running back Aaron Jones led the NFL with 19 total touchdowns last year. It might be a good idea to place a defender within 15 yards of Jones in the red zone. Maybe.

.@Showtyme_33 with the TOUCHDOWN & the first Lambeau Leap of the season!#DETvsGB | #GoPackGo

The Motor City Kitties didn’t want to cover Jones either, apparently. A quick flick of the wrist by Rodgers results in six easy points — and a very 2020 Lambeau Leap.

Looking back at this play, do you think New Orleans was expecting Green Bay to run the ball here? We don’t know — it’s hard to tell. Wink. Rodgers takes advantage, per usual.

If Tonyan looks wide open here, he is — but it’s because he tumbled into a somersault like he’s Simone Biles completing a floor routine at the Olympics. It’s not easy to keep an eye on receivers who look like they’re burrowing into the grass at Lambeau Field.

8: STOP US IF YOU’D HEARD THIS BEFORE – TOUCHDOWN, TONYAN.

Kids, this is what we like to call finding a soft spot in the secondary.

Trying to throw a leather ball with a 248-pound linebacker in your face does not seem fun, but Rodgers makes it look easy, at least. Is that Dirk Nowitzki shooting a fadeaway jumper or Rodgers tossing another TD?

5: SOMEONE GIVE TONYAN SOME ICE

Bringing the heat. Zipping it in there. Putting some extra mustard on it. No matter how you say it, we’d like to get a radar gun out there for this slingshot of a pass.

There is no way this should’ve been six points. Allen Lazard is not open on this play. And yet, Rodgers throws it with a sidearm motion around the bull-rushing Jalyn Holmes and delivers a strike where only Lazard could catch it. Move over, Patrick Mahomes!

Go UP for it big man!!@MarcedesLewis89 and @AaronRodgers12 making plays 🔥

It’s mind-boggling how casually Rodgers can throw the ball and have it still drop right in the hands of Marcedes Lewis. Lewis definitely didn’t stick the landing, but it doesn’t take away from a beauty of a pass.

.@AaronRodgers12 going DEEP to @MVS__11 for the TOUCHDOWN!#GBvsMIN | #GoPackGo

Sometimes it’s just fun to watch No. 12 air it out. Rodgers has thrown five passes for 40+ yards this season, but this is the only one that went for six points.

Everyone says Rodgers is elite at extending plays. This is what they mean. The two closest defenders to this absolute laser from Rodgers? Harrison Smith, a five-time Pro Bowl safety and Anthony Harris, who led the NFL in interceptions last year. Never a doubt.

The best cider farms to visit this autumn in Somerset, Devon,...

Singleton, 42, reveals she’s been on over EIGHTY first dates