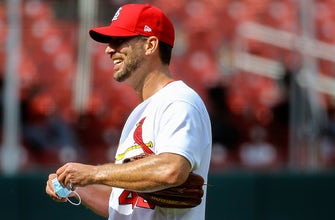 As a star pitcher for the Cardinals, Adam Wainwright always has been a captivating personality on TV. Now he’ll give it a whirl from our end.

When the Miami Marlins and Atlanta Braves begin their NL Division Series on Tuesday afternoon in Houston, Wainwright will be a game analyst on FS1.

Wainwright began his professional career with the Braves, who traded him to St. Louis in December 2003. He made his major league debut in 2005 and has gone 167-98 with a 3.38 ERA in his big league career.

The 39-year-old right-hander knows something about the postseason, too. He has pitched in 28 playoff games with a 4-5 record, 2.89 ERA and four saves, including the last out of the deciding game of the 2006 World Series against Detroit.

Troy Aikman on NFC East race: ‘I certainly would never count out the Eagles’

Number of daily coronavirus cases in Europe doubles to 200,000