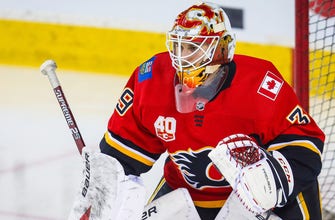 The Minnesota Wild will have a new goaltender between the pipes in 2020-21.

With NHL free agency beginning Friday at 11 a.m., Minnesota wasted no time and inked Cam Talbot to a three-year deal worth $11 million.

The Wild will be the fifth team Talbot has suited up for since debuting in 2013, as he’s spent time with Edmonton, the New York Rangers, Philadelphia and Calgary. In 2019-20, Talbot appeared in 26 contests for the Flames and logged a 12-10-1 record, 2.63 goals against average (GAA) and a .919 save percentage. Talbot appeared in all 10 of Calgary’s postseason games this year and registered five wins, 2.42 GAA and a .924 save percentage. The Flames beat Winnipeg in the qualifying round but fell in six games to the Dallas Stars.

Talbot had his best season in 2016-17 with the Oilers. While playing in 73 contests, Talbot registered a league-high 42 wins and 1,946 saves. He was named an All-Star for the only time in his career and finished fourth in Venzina Trophy voting, an award given to the league’s best goaltender.

The Wild needed to sign a goalie after general manager Bill Guerin traded Devan Dubnyk to San Jose on Oct. 5. Dubnyk had been the Wild’s primary netminder since 2015 and ranked second among goalies in franchise history in games played (328), wins (177) and saves (8,470).

It’s been a busy offseason for Guerin, who also traded away forwards Eric Staal, Ryan Donato and Luke Kunin and allowed longtime captain Mikko Koivu to walk out the door on an expired contract.